Clear communication, especially when passing information regarding military operations, is vitally important at all levels. No more so than when communicating over wireless communications, where poor clarity of the information being spoken may result in miscommunication. In order to ensure accurate passage of information, we use a recognised system of letters known as the phonetic alphabet.

In the example we had above, we had a lot of information that we were receiving over the radio, and writing down in our radio log. Both the transmitted information and the written information need to be done as clearly as possible. Each letter must be written clearly in handwritten text, and the verbal spelling of important words we break down and speak each letter using a word that can not be confused with any other. This is the phonetic alphabet, and it is common across all NATO countries. It is important that you are able to quickly spell and transcribe (listen and write) words using the phonetic alphabet, as well as write them clearly. Have a look at the table of letters and numbers and see how they are written and spoken.

Did you notice any differences in the way the letters of numbers were written in the table above? There are a few. In order to prevent misunderstandings when writing transcribing messages, some letters or numbers that could be confused with other similar ones are written differently to avoid this confusion. Take a look at these two examples below:

The digits 2, Z, 0 and O all look similar. In typed format we can differentiate between the letters, but when hand written errors can appear. So we make sure we use the correct written letters for Ø and Z.

The digits 1, 7, I and L could all look very similar if written in a sloppy manner. When typed this is not a problem, provided all upper case letters are used (capital i – I looks similar to lowercase L – l). But if we are clear about how we write the number 1 for example, with a bar at the bottom, errors should not occur.

The main figures and letters to write differently are:

If we have mastered the phonetic alphabet, we need to know how to pass information using it. When we need to spell out a word or number, we use two prowords to warn the radio operator on the other end that we are about to pass over this information. These pro words are:

Such as I SPELL CHARLIE ALPHA DELTA ECHO TANGO, or FIGURES FIVE NINE SIX ONE

Using what we now know, let’s listen to the car registration example again, and look how we would write these entries into our log book. 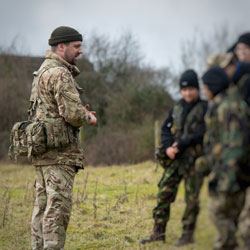